The future style of leadership will be empowering, transformational and ethical, requiring people with a profound knowledge of human nature (given the paradox of using digital means for that purpose), while at the same time having extensive knowledge of the humanities and the reality of the human being andconsidering this to be “an end in itself”, and sorespecting human nature while searching for the unity and harmony of the organization.

The new leader in the digital society will be a great visionary, with a purpose of motivation which will be by nature transcendental, orientated towards serving the individual people and the society that they comprise, with a substantial ethical foundation, socially committed and always leading by example with their own conduct.

The traditional theories of leadership emphasise how to achieve objectives and goals in the short term without taking into consideration how to achieve these results. With very little accountability to their respective organisations or society as a whole.

This lack of commitment or emotional disconnection with the company, has been revealed, for example by a survey done by Gallup [i] in 2000, when the charting of levels of commitment of the active population in the United States began.

The results of the survey show that less than a third (31.5%) of workers in the US were highly motivated and committed to their current jobs in 2014. As VROOM predicted, the majority of the employees, 51%, are unmotivated and without commitment, and 17.5% were “actively disconnected”, or engaged themselves as little as possible in 2014. 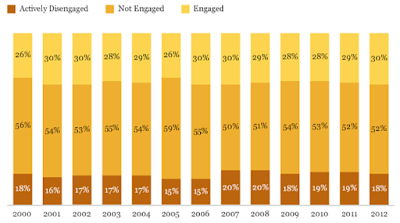 Graph 1. Development of north American worker commitment. Source: Gallup Out of approximately 100 million people in the US who have full time employment,

In the case of Spain, up to 62% of employees are shown to be disconnected from the work that they carry out, while 20% affirm feeling very disconnected. Only 18%are committed and motivated. [ii]
Following a report from Randstad [iii] in 2014, in Spain presenteeism has increased in the last few years from 45% in 2010 to 85% in 2012. Randstad in this case define as presenteeism the increased number of hours the employees do in their working day since the crisis for fear of losing their jobs. So then, more hours are worked, but what is really achieved?

From the Gallup survey significant conclusions can be drawn about the behaviour of the employees and their managers and the results of the organisations.

The “highly motivated” employees represent the “soul” of the organisations.
The traditional theories of leadership don't face the phenomenon of “presenteeism” [1]. Presenteeism is understood to be the fact of spending more time in the workplace than required for the working day; coming to work when ill, or simply coming to work - but with a complete lack of motivation, and in any instance coming to work for fear of losing the job.

In the UK, with a totally liberal culture - and possibly to make more, or lose less, money - they are making an effort, with something called, “Health and well-being at work” (Dewe, Philip and Cooper, Cary). [2]

Leadership in the new digital society

In the new digital society the labour force requires a leadership style with a greater emotional quality, and sense of ethics. The ingredients necessary to achieve a ”good place to work” could be the following:

In the digital society leadershipwill have a marked social character, with a vision directed towards structuring solutions and joining different work groups together to achieve an effective cooperation and a mission of common aims.

In today's organisations it will be necessary for different types of leadership to coexist depending on the digital development of the individuals. With a less hierarchical vision, with a greater transversality, giving the work teams higher levels of responsibility and the capacity to make decisions, with the leader being a catalyst that offers the necessary means for the growth of the organisation while at the same time respecting the individuality, circumstances and dignity of the individuals. The leader also being creative to offer solutions in an unexplored digital environment, and engaging themselves in a vision of peripheral communication, reaching social networks, and of course, human and personal contact with the individuals.
The cost of sick leave - for example for depression (+40%) and repetitive strain and back problems- and presenteeism
Recent studies indicate that 221 million days of work are lost per year due to absenteeism at work with a total cost to business and Social Security of €8 billion, following a study by the SPEC group.[iv]

So, presenteeism has a cost three times higher than absenteeism [v] and results in work at a pace lower than average productivity because the employees do not find themselves in good health or they are de-motivated because of they coming to work for fear of losing it.

So, how much money are businesses currently losing and nevertheless continue training leaders with the traditional idea of always looking for short term economic benefits?

Presenteeism at work is defined as the workers being present at their work posts beyond the remit of their normal timetable, and there are studies that say that this has increased 40% in the last two years due to the crisis. The fear of losing your job is the main reason given currently for presentism at work, combined with the fact that there is insufficient staff to carry out the work. Actually, in one of the studies done by Randstad it has been demonstrated that the workers do not stay at their work posts for reasons of productivity, but only with the objective of keeping their job. The idea of “being present at your work place” is related to the most traditional idea in our country (Spain) that in turn is associated to the old industrial premise: if you are not at your work place , you are not working.

In the book “Well - Being and work: Towards a Balanced Agenda (Psychology for Organizational success)” (2012) Dewe, P & Cooper, C, they analyze how well-being in the workplace is one of the fastest growing areas of concern in the business world, the public sector and government. The book analyses the causes of stress in the context of modern employment, and offers practical solutions to combat employee stress, and puts forward strategies that favor the development of a healthy work situation.